A special treat arrived in my mailbox yesterday from Sicily, Italy. It combines two things I love in postcards – maps and GLITTER! 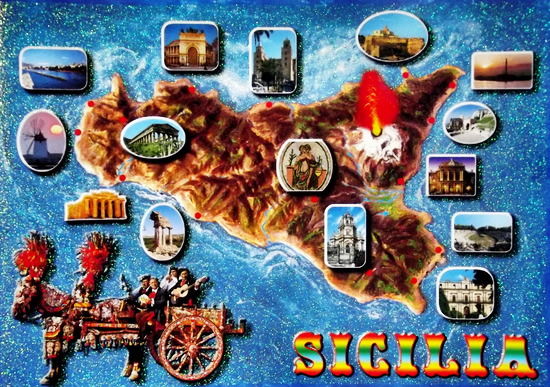 Who doesn’t love glitter?! Glitter can make drab things like oceans so shiny and exciting. I also love the gradient on the word “Sicilia” and the horse and cart all glittered up. The use of a topographical map with a collage of scenic vignettes is quite novel and visually arresting too.

The sender knows what I like in postcards clearly, as the message indicates:

Postcard message:
“A glitter map! How exciting, even if it has been out in the sun too long. But hey, we are Sicily so we will not get our hopes down! Even the last day we are going to a volcano, but still we are got to a beach sister or [unknown] or friends? Bye from X.”

The latter part of the message loses me – but hey, it’s Italy and vino and la dolce vita and glitter and all! Bellissimo!!!

This postcard came in yesterday from the Collection’s great donor and it is a notable item for quite a few reasons.

This is the only postcard I have seen that has images of postcards on it (how wonderfully postmodern)!

The postcard was purchased in Flagstaff, Arizona right off the fabled United States highway Route 66. It’s the the third postcard I have ever received from Arizona and the  fifth in total. What’s up with that? Do people not go to Arizona?

Here’s the reverse side:

Postcard caption:
“Route 66 – From beneath the trees in Chicago’s Grant Park, Historic Route 66 takes in the beauty of the heartland, the plains and the desert southwest, before coming to rest on the edge of the Pacific Ocean.
Images courtesy of Lake County (IL) Museum, Curt Teich Postcard Archives“

Postcard message:
“One of these years, we should do a car trip down ‘route 66’. I’ve done bits of the 3 western states now…. Bearizona was a postcard bonanza.”

This postcard Curt Teich Postcard Archives before – but now I’m excited as it’s the world’s “largest public collection of postcards”. Curt Teich, based out of Illinois,  was once the world’s largest postcard printer.

Finally, this postcard has another notable claim – it’s likely the first item in the Collection with a QR code (and considering QR codes are already dying out – it may be the only one ever).

Now I Know Where Malmö Is

Posted by glenfarrelly on January 23, 2014
Posted in: Scandinavia. Tagged: map. Leave a comment

I’ve heard so much about Malmö, Sweden for years (okay I’ve heard it mentioned in passing a couple times) but I had no idea where it was. Until I received this map postcard:

I had to look up Söderslätt Sydvastra Skåne – it appears that Söderslätt is a region in Southwest area of Skåne province. (BTW Skåne, or Scania in English, is likely where Scandinavia got its name.)

Here’s the reverse side of the postcard:

Postcard caption:
[Guess they don’t expect many English tourists to Söderslätt as I can’t even begin to figure out what the hell the caption is.]

Postcard message:
“You asked for a map card – found this today at the train station on our way home from Lund. Lund is pretty – pretty boring. But we saw a cool clock in the church.”

Thanks to this postcard I also know where Lund is.

One of the Collection’s patron has been actively donating lately, including this odd-shaped specimen: 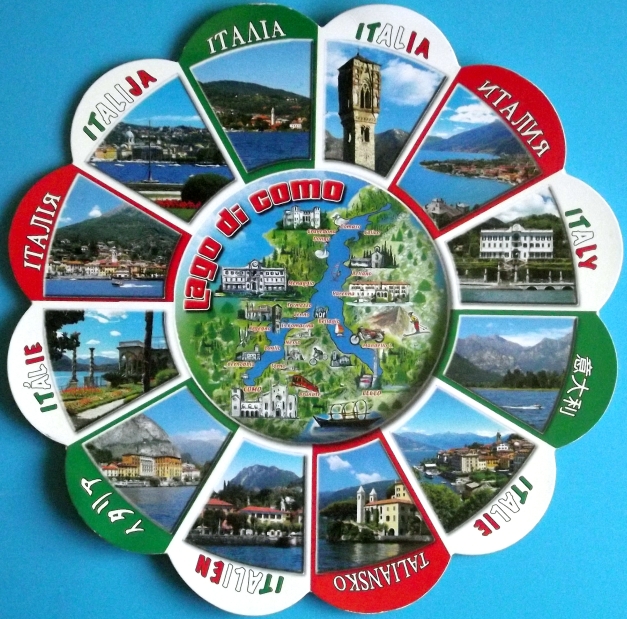 Oh the different tricks postcard makers will do to get attention.  I’m not a big fan of collage postcards, but they aren’t usually presented in such a fun shape. And now I know the word for Italy in 12 languages.

Here’s the reverse side:

Postcard message:
“Hello from Lake Como with a broken shoulder. Hurts to write even though it’s my right shoulder.”

I believe the sender broke her shoulder in her excitement at spotting a gelato shop, which I can completely understand. Geloto is one of the few things in life better than postcards!

I’ve been working non-stop lately on my PhD research on locative media.  As such, I have been reading a lot about various ways of representing place – from guidebooks to location-based services or as this recently acquired specimens below demonstrates – maps and postcards:

The postcard is of Lake Como area in Italy.  Aside from presenting a whole bunch of roads and towns (where I’m sure one could easily find delicious panini and gelato),  this map postcard makes Lake Como look more like a river.

Here’s the flip side: 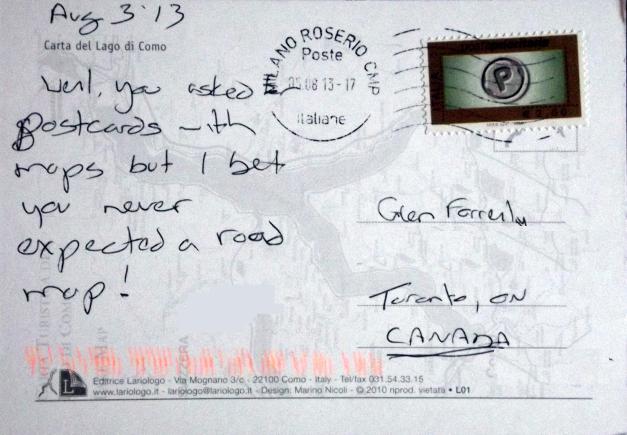 Postcard message:
“Well, you asked for postcards with maps, but I bet you never expected a road map!”

For the record, I did mention on this blog about how – as a child – I loved postcards with maps.  I don’t quite get the appeal now, however, as they aren’t a useful map nor a scenic or indicative postcard image.

Here’s a genre of postcards that I used to love as a kid.  Every time I went to a new U.S. state or Canadian province, this was the first type of postcard I searched for:

I loved map postcards. I have no idea as they are not visually or informationally interesting – and I’ve never had a thing for maps.  This is one of my favourites of the map postcard genre – and probably the best I’ve seen.  The peach colour (unique in itself) really ties in well to the state’s nickname (“The Peach State”).

At some point, I realized that map postcards were boring and I haven’t sought them out again. But lately, I love how boring they are and would love some new ones to add to the collection, but they are really hard to find now. (Feel free to send me any…)